There are many excellent tools for analysis of Next Gen Sequencing data in the standard BAM alignment format so I was surprised how difficult it was for me to get a nice graph of genome coverage.  This will be trivial for a lot of hard core bioinformatics coders, so just move along if you are bored/annoyed.

I needed to check the evenness of coverage across intervals of a bacterial genome that we were re-sequencing for various experimental reasons. I aligned my FASTQ to a reference genome from GenBank using Bowtie2. There are several nice tools in the SAMTools and BEDTools kits that produce either a base by base coverage count or a histogram of coverage showing how many bases are covered how deeply.  I wanted a map at 1 Kb resolution. It took a while to figure out that I first need to make a BED file of intervals from my genome - with correct names for the 'chromosomes' that match the SAM header, and then use 'samtools bedcov' to get my intervals. Then a simple graph from Excel or R shows the coverage per interval along the genome.

1) Create a Bowtie2 index of the reference genome (can be from GenBank, or can be a de novo assembly of contigs created locally from this FASTQ data).   Reference_in must be FASTA format.
bt2_base is the name you will call the index.

2) Align the FASTQ file(s) to the Reference. bt2-idx is the name of the index created in the previous step. There are a ton of options for stringency of alignment, format of input data, etc. I set this to use 16 CPU threads.  I usually like to leave out the unaligned reads, which can reduce the output file size somewhat. [Of course, the unalinged reads are the goal when you use Bowtie as a filter to remove human from microbiome data or any other sort of contaminant screen.]

3) Is is annoying that Bowtie produces output in SAM format, and 99% of the time, the very first thing you have to do is convert to sorted BAM. Note that samtools sort puts its own .bam on the end, so if your are not careful you will get files named output.bam.bam


4) Create a 'genome' file for your reference genome. This is just a tab delimited file that names the chromosomes (or individudal sequences that may be in a multi-FASTA file, such as contig names).
It is super easy to mess this up. The best way is to view the top of your output.sam file created by bowtie2. The lines that start with @ are your chromosome headers, and they very helpfully already show the length of each one.  This is a bit of a pain if you  have a genome with lots of contigs, but a little 'cut' and 'paste' in bash or Excel will get you there.

and here is the genome file I made:

5) Make a set of intervals with bedtools makewindows. I wanted 1 Kb intervals, so I use -w 1000.
The result is a simple BED file with one line for each 1Kb window of the genome.

6) Use samtools bedcov to count the total number of bases in the BAM file that are located in each of the intervals ('sum of per base read depths per BED region'). This works much faster than any other coverage tool that I have tested.

7) Divide the sum of coverage by the window size (/1000 in my case), and plot the average coverage per window as a scatter plot, using the end of each interval as the X axis and the coverage as the Y.
Histogram will only work nicely if you have very few intervals. In my case, high and low coverage outlier intervals are easily visible. 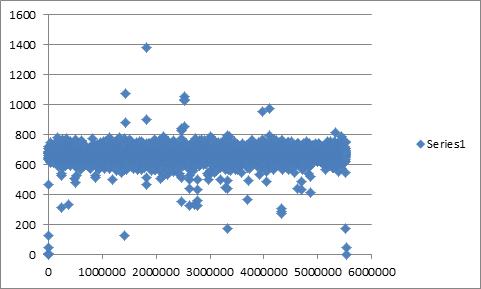 Public databases of genetic information have a fundamental garbage-in>garbage-out problem. A huge number of useful databases are populated by pulling information from other databases and adding new value by computational inferences, but automated linking of databases can propagate incorrect information. The curators of primary repositories such as GenBank make an substantial effort to publish only correct information, so they are very conservative about annotating genes with only verifiable information. NCBI also has a policy that the original depositor of any given entry (a gene, protein, genome, experimental dataset, etc.) is the author of its annotation and metadata, and no one else can alter it.

Staphylococcus aureus is an important human pathogen with perhaps the largest number of whole genome sequences in public repositories of any bacteria. NCBI has 8367 Staph genomes in its “Genomes” section (on Jan 1, 2018), and another ~40,000 in the SRA and Whole Genome Shotgun sections. However, GenBank has chosen strain NCTC 8325 as the Reference Genome for Staph, and put its genes in RefSeq.

This genome was sequenced, annotated, and submitted on 27-Jan-2006 by Gillaspy et al from the Oklahoma Health Sciences Center. As a result of this “Reference Genome” designation, an automatic lookup of a Staph gene in GenBank is likely to get the annotation from NCTC 8325. This particular Staph genome has 2,767 protein coding genes (plus 30 pseudogenes, 61 tRNA, and 16 rRNA genes), however 1496 of these proteins are annotated with only “hypothetical protein” in their “gene product” or “description” field. This is very confusing, since many of these genes are 100% identical to proteins that have specific and well documented functions in other Staph strains.

Here is one example:

GenBank knows that this is not the correct annotation for this protein. In the “Region” sub-field of the record (which is very rarely used by automated annotation tools that take data from GenBank) an appropriate function, COG and a CDD conserved domain are noted:

NCBI also links this gene to an “Identical Protein Group” where 3957 proteins are listed with 100% amino acid identity, which are annotated variously as: “azaleucine resistance protein AzlC”, “branched-chain amino acid ABC transporter permease”, “AzlC”, and “Inner membrane protein YgaZ”. A very conservative annotation bot might panic at this level of inconsistency and default to the lowest common denominator of “hypothetical protein”. However, a more sophisticated automaton might compare the protein sequence to PFAM or COG protein functional families and assign a common annotation to them all.

The incorrect “hypothetical” annotations for Staph genes in GenBank can be found downstream in many other databases, such as the Database of Essential Genes, AureoWiki, KEGG, UniProt, etc. which all upload their primary annotation from GenBank. So someone sequencing a new strain of Staph and using any of these resources to annotate predicted genes will probably end up assigning “hypothetical protein” for the AzlC gene and many hundreds of others, perpetuating the cycle of misinformation.

In a lot of other cases, it does not seem possible for an algorithm to resolve messy annotations that a human expert might  be able to figure out. For example, Staph strain COL has many hypothetical genes such as SACOL1097. NCBI Identical Proteins also show only “hypothetical protein” annotations.  However, a BLAST search shows 95% identity to nitrogen fixation protein NifR.