We have been testing out the Oxford MinION DNA sequencing machine to see what it can contribute to larger de novo sequencing projects.  Most of the posted data so far come from small genomes where moderate coverage is more easily obtained.  Recent publications claim improved sequence quality for Oxfort MinION.

We are working on a new de novo sequence for the little skate shark ((Leucoraja erinacea), an interesting system to study developmental biology.  The skate has a BIG genome, estimated at 4 Gb (bigger than human), so this is going to be a difficult project. The existing skate genome in Genbank and the SkateBase website is not in very good shape (3 million contigs with  N50 size of 665 bp).

We got a couple of preliminary Oxford MinION reads from skate DNA - not nearly enough coverage to make a dent in this project, just having a look at the data. Oxford produces two kinds of data (in their own annoying FAST5 format, but I won't rant about that right now), single pass 1D and double pass 2D.  [My Bioinformatics programmer Yuhan Hao did this analysis.] Here is what our data looks like. 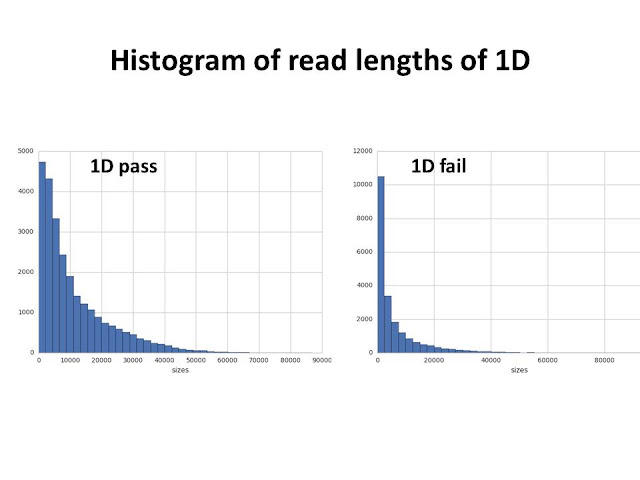 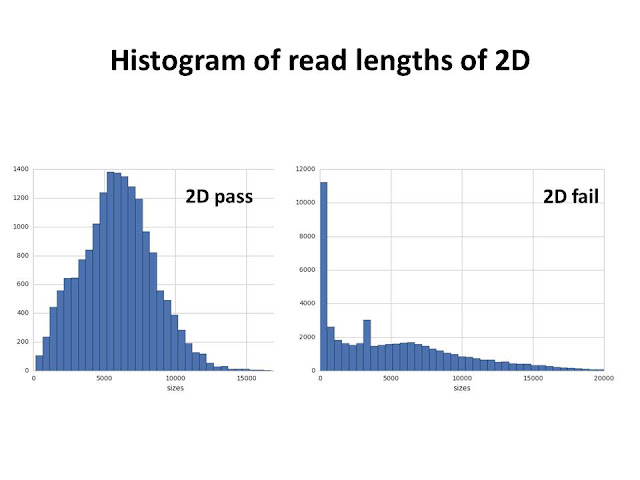 So the 1D reads are really long - some more than 50 kb. The 2D reads are mostly 2-10 kb.  The SkateBase has a complete contig of the mitochondrial genome, so we were able to align the Oxford sequences to this as a reference. Coverage was low, but we do have some regions where both 1D and 2D reads match the reference. What we can see is that the 1D reads have a lot of SNPs vs the reference, while the 2D reads have very few SNPs- so it is clear that the 2D reads have been successfully error corrected.  Strangely, both the 1D and 2D reads have a lot of insertion-deletion errors (several per hundred bases) compared to the reference, and in fact they do not match each other - so we consider these to all be novel, uncorrected errors. 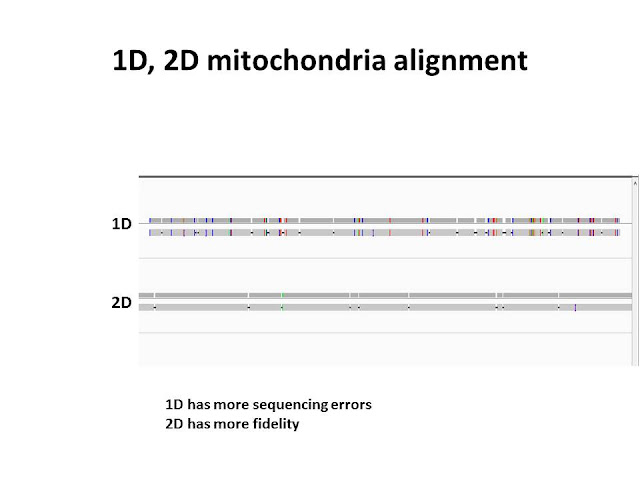 We also ran a standard Illumina whole genome shotgun sequencing run for the skate genome, which we aligned to the mitochondrial reference. With this data, we can see a small number of Oxford 2D SNPs shared by hundreds of Illumina reads, others not. None of the indels are supported by our Illumina reads. 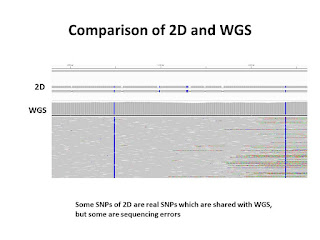 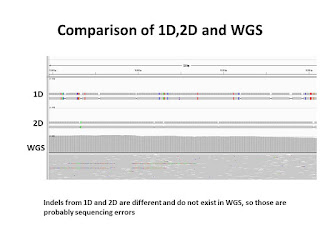 Other investigators have had poor quality Oxoford sequences. With more coverage, we may be able to use the Oxoford reads as scaffolds for our de novo assembly. It may be possible to use Illumina reads for error correction, and mark all uncorrected areas of the Oxford sequences as low quality, but that is not the usual method for submitting draft genomes to Genbank.

Hello, I am Theresa Williams After being in relationship with Anderson for years, he broke up with me, I did everything possible to bring him back but all was in vain, I wanted him back so much because of the love I have for him, I begged him with everything, I made promises but he refused. I explained my problem to my friend and she suggested that I should rather contact a spell caster that could help me cast a spell to bring him back but I am the type that never believed in spell, I had no choice than to try it, I mailed the spell caster, and he told me there was no problem that everything will be okay before three days, that my ex will return to me before three days, he cast the spell and surprisingly in the second day, it was around 4 pm. My ex called me, I was so surprised, I answered the call and all he said was that he was so sorry for everything that happened that he wanted me to return to him, that he loves me so much. I was so happy and went to him that was how we started living together happily again. Since then, I have made promise that anybody I know that have a relationship problem, I would be of help to such person by referring him or her to the only real and powerful spell caster who helped me with my own problem. email: drogunduspellcaster@gmail.com you can email him if you need his assistance in your relationship or any other Case.

1) Love Spells
2) Lost Love Spells
3) Divorce Spells
4) Marriage Spells
5) Binding Spell.
6) Breakup Spells
7) Banish a past Lover
8.) You want to be promoted in your office/ Lottery spell
9) want to satisfy your lover
Contact this great man if you are having any problem for a lasting solution
through drogunduspellcaster@gmail.com


This is the most wonderful thing i have ever experienced. I visited a forum here on the internet on the 17 June 2018, and i saw a marvelous testimonies on the forum about the good works Dr Ilekhojie. Am from the United States. I never believed it, because have never heard anything about such miracle before. No body would have been able to convince me about it not until Dr Ilekhojie did a marvelous work for me that restored my marriage of 4 years by getting back my divorced wife within 48 hours just as i read on the internet. I was truly shocked when my wife came home pleading for forgiveness to accept her back. Am really short of words to show my appreciation to Dr Ilekhojie. For he's a God sent to me and my entire family for divine restoration of marriage. Are you in need of any help whatsoever? Don't hesitate to get in touch with him now. He also specializes on the follow;

Do anyone still doubt natural herbs? I've seen the great importance of natural herbs and the wonderful work they have done in people's lives. I wonder why people still spend their money on surgery, injections and drugs each time they are sick. Natural herbs can cure all kinds of illness including herpes, diabetics, asthma, HIV, hepatitis, etc. I've seen it with my own eyes. I was cured of cancer and my aunt and her husband were cured of herpes by Dr Udi who uses natural herbs to cure different kind of illness. Even Dr.Udi proved to the whole world countless times that natural herbs can cure all diseases and he cured countless of people using natural herbs. I know is hard to believe but am a living testimony. There is no harm in trying herbs it will only get you cured from what you being so why don't you give herbs a try and see it effectiveness Contact or email Dr Udi (Drudiherbalhome@gmail.com) (phone/whatsap no): +2348051243538.

hello i just want to bring to your notice an easy way of becoming a millionaire.I read about a blank ATM card & decided to reach out to this vendor, he then gave me the guidelines & proof of how the card was cloned. Though i wasn’t sure about their services but they assured me of safe & geniue transaction if i obliged to their terms and conditions which i eventually agreed to & 4days later i was delivered a card by the Delivery service which was sent from this hacker. I was shocked when the card dispensed $2000 instant, I've been able to cash out $10k...All thanks to you guys, you can email this real and reliable hacker via email: (verifiedhackinghome.hackers@gmail.com) or whatapp +1(516) 494 0313

You need help to GET PREGNANT? contact Priest Babaka on this email (babaka.wolf@gmail.com), i am here to share my testimony on HOW I CONCEIVE my babies after i suffer from PCOS and my TUBES ARE TIED, i have been married to my husband for 11 years without no issue. i had problems with my in-laws even my husband started to have new affairs aside our marriage.it was a very terrible thing to bear, been to many doctors and yet my case remain the same, i was now seen as always unhappy. my husband was not given me any attention that i needed from him. on this faithful day, i decided to check the net for updates on Trying To Conceive with pcos and my tubes are tied, and i came across a story of a woman who Priest Babaka helped to conceive a twins under same condition as mine. so i decided to put a try because this has been my greatest problem in life. today i am a proud mom with two son.contact him today via email: babaka.wolf@gmail.com or Facebook at priest.babaka he will surely make your dreams come through

You need help to GET PREGNANT? contact Priest Babaka on this email (babaka.wolf@gmail.com), i am here to share my testimony on HOW I CONCEIVE my babies after i suffer from PCOS and my TUBES ARE TIED, i have been married to my husband for 11 years without no issue. i had problems with my in-laws even my husband started to have new affairs aside our marriage.it was a very terrible thing to bear, been to many doctors and yet my case remain the same, i was now seen as always unhappy. my husband was not given me any attention that i needed from him. on this faithful day, i decided to check the net for updates on Trying To Conceive with pcos and my tubes are tied, and i came across a story of a woman who Priest Babaka helped to conceive a twins under same condition as mine. so i decided to put a try because this has been my greatest problem in life. today i am a proud mom with two son.contact him today via email: babaka.wolf@gmail.com or Facebook at priest.babaka he will surely make your dreams come through

Early MinION sequencing runs had forward and reverse DNA templates joined together by a hairpin adapter, so that the sequencer would read both strands from the same template. The consensus sequence that was generated by combining the base calls of opposite strands is referred to as a 2D read.

Due to a dispute with Pacific Biosciences, and for other reasons related to chemistry and base calling, the equivalent mode in current sequencing runs is called 1D². There is no physical ligation of forward and reverse templates, but the kit and flow cell chemistry are modified to encourage the reverse strand to follow the forward strand very soon afterward through the pore, with the joining and consensus generation carried out in software after the sequencing is done. In the output fast5 files, these 1D² reads can also be referred to as 2D.

Love never gives up, never loses faith, is always hopeful, and endures through every circumstances. I give God all the glory for bringing Lord Zakuza into my life for helping me get my wife back that got me divorced for one year. I was the last person on earth to accept the fact that spells exist or work not until I was referred to Lord Zakuza online to who has helped so many people with his powerful spells. I had no other option than to give it a try because 3 months after the divorce, I was demoted at my place of work due to depression for I don't know what to do to get her back but thank God today for using Lord Zakuza to get my happiness and love life back within 48 hours. Just last week here, I was promoted back to my position and I'm here to share my own experience with this man called Lord Zakuza. I don't know what you are going through today but know that in all situation there's always a way out. Lord Zakuza also prepares spells like Lottery spell, job spell, spell to stop a divorce, spell cure for any diseases, protection spell, spell to become successful and wealthy E.T.C. Contact him now for any help via TEXT OR WHATSAPP MESSENGER with: +1 740-573-9483 and Email on: Lordzakuza7@gmail.com